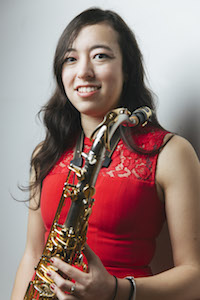 Driven by an endless need for expressing herself creatively, young composer and multi-instrumentalist Chelsea McBride has burst onto the Toronto jazz scene. Still only 24, McBride has performed at the TD Toronto Jazz Festival, Beaches Jazz Festival and the Rex Hotel. She’s also worked alongside many local jazz artists including Brownman Ali and William Carn and studied with acclaimed musicians David Occhipinti, Darcy James Argue and Mike Allen. Born and raised in Vancouver B.C., Chelsea was surrounded and fascinated by music. She started playing piano at the age of 3, and saxophone throughout elementary school. By the end of high school she had already performed in competitions at provincial and national levels. In 2014, she graduated from the Humber Bachelor of Music program in Toronto, ON and was the first recipient of the Toronto Arts Foundation’s Emerging Jazz Artist award. Whether it’s her big band (Chelsea McBride’s Socialist Night School), her pop-fusion band (Chelsea and the Cityscape), her jazz trio (Chelsea McBride Group), or her video game cover band (Koopa Troop), Chelsea is a diverse musician who refuses to stay in one creative box. Aside from her own projects, she also regularly performs with other local acts including the Brad Cheeseman Group, Skirt Check, Soul Finger and Elton Joan. Chelsea can be heard around Toronto playing several shows per month. She has released two EPs with Chelsea and the Cityscape and one EP with Socialist Night School.

"State of Mind" depicts the pause being taken at the fork in the road, as one faces a tough life-changing decision, and does not use the guitar, bass, or drums. It is meant to be pretty and hopeful, and even the fastest lines should be fluid in execution.

"State of Mind (reprise)" is the counterpart to "State of Mind" and also does not use guitar, bass or drums. The life-changing decision has now been made, and this is the point where one moves on with their life - hence the uplifting resolution at the end of the piece.

"River" is about reflecting on one's troubles in the midst of the peace, calm, and strength of the eponymous river. The phrases here should be smoothly articulated throughout, and the brass should be regal sounding wherever possible.

"Julia" is inspired by a long-lost friend, someone who was incredibly important at one point and then just fell off the map. This piece features lush ensemble passages, a challenging soprano sax feature, and a modulation into and out of double-time.

"Thinking In Circles" is about negative thought spirals and inner conflict. This features an extended section without the drums and a slow-down/speed-up much like a wind-up toy.

"Last Resorts" aims to capture a feeling of wistfulness and desperation - what happens when you're out of ideas to solve a problem? The whole piece floats between a light and swinging Afro-Cuban feel and a heavier, funky 4/4 groove, and features a trumpet solo over the latter groove, and a drum solo around ensemble shots/pads after an unaccompanied horn soli.

"Ambleside" embodies the peace and stillness of a quiet afternoon near the Guardian at Ambleside Park in West Vancouver...but an Ambleside surrounded by orange clouds and purple skies - closer to a Jovian moon.

Inspired by a day of terrible commuting, "Intransitory" embodies all of the feelings of being a long-distance commuter - constantly in motion, often exhausted.

Picture your six-year-old self, in onesie pajamas (or whatever you wore when you were six), falling through a purple sky with orange clouds. Until you land, in a carnival – broken, tilted Ferris wheel on one side, dusty, abandoned carousel, chipped paint, fading, on the other. You see the gates open, and the buttons for the carousel are exposed in front of you, so you approach, teddy bear in one hand, the other outstretched to turn on the machine – when grey, translucent spirits, begin to swirl around your head.

After the worst day of your life, you end up running into the person you least wanted to see...and try to impress them into coming back into your life. It's not as excellent a start as you were hoping, to say the least

A follow up to "Smooth", this piece begins as a Broadway style playoff and takes a moody turn into the dark side of your mind, coming to an unsteady resolution as your walk takes you home and into bed.

Arrival of the Pegasus

Based on the Six Theme from Battlestar: Galactica, and the plot from season 3, episode 4 of that show, this piece envisions an epic battle in space, from start to finish.

Imagine yourself 30 years older than you are, with friends you've known for decades, gossiping around a campfire or a dinner table. When you look back on your experiences, will you be proud of them? Or will you think of yourselves as foolish?

You are asleep, in a dimension that does not belong to you, and your faithful friend and guide has led you to the end of the road. It's time for you to wake up and return home, but first, you get a chance to say goodbye.

s the partner to "Ambleside", this reprise should be brighter and more resolute, and can move a little more quickly in tempo. This is the denouement of the story; the listener should feel like they've been on a long journey with a successful conclusion.

This is a celebratory piece - about all things that are good about love, and friends, and a solid groove. "Something Simple" was written to close a concert on my 21st birthday, and we've used it to close every show since.