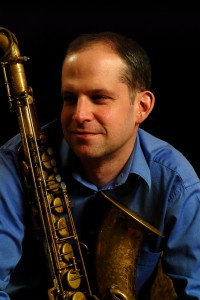 A native of Toronto, Andy Ballantyne began learning music in the Toronto public school system, studying clarinet and saxophone. He soon developed an interest in jazz and studied privately with Woody Herman alumnus Steve Lederer. Later teachers included Pat Labarbara, Alex Dean and Mike Murley. Exposure to recordings of the Stan Kenton Band, Nimmons and Nine Plus Six, and especially Rob McConnell’s Boss Brass fueled an early interest in composition and arranging. Andy went on to study arranging, orchestration and composition with Ron Collier at Humber College and Phil Nimmons at the University of Toronto. Andy gained his first professional experience at Expo’86 in Vancouver playing daily for five months with the Humber College big band under the direction of Ron Collier, and went on to play in the Ron Collier Jazz Orchestra up until the time of Ron’s death in 2003. Over the past 20 years, Andy has established himself on the Toronto scene as a versatile performer on saxophone and woodwinds, as well as an arranger and jazz educator. He is a regular member of several noted jazz groups, including NOJO, John Macleod’s Rex Hotel Orchestra, the Art of Jazz Big Band, Nimmons and Nine Now, and the Paul Read Orchestra. Andy has also performed with groups led by Don Thompson, Dave Young, Mark McLean, Mike McClennan and Laila Biali. He currently leads two of his own groups: the 11-piece Andy Ballantyne Large Ensemble (ABLE) and The Sidewinders, a quintet dedicated to exploring and rediscovering the acoustic soul jazz of the 1960’s. Future plans include a trio project dedicated to the music of Jimmy Giuffre. Career highlight include appearances with some of the world’s foremost jazz musicians and composers including Dave Holland, Sam Rivers, Don Byron, Kevin Mahogany, Vince Mendoza, Kenny Wheeler and Carla Bley. Andy has recorded performances for broadcast on CBC’s “Jazz Beat”, and for Jazz FM’s “Sound of Toronto Jazz” series, and he also toured western Canada with NOJO9 in 2005. In 2008 he had the honor of performing with Rob McConnell and the Boss Brass at their highly anticipated reunion concert at the Old Mill in Toronto. Andy’s arrangements and compositions have been featured on several recordings, and have also been performed by the University of Toronto Ten O’Clock Jazz Orchestra at the International Association of Jazz Educators Conference in Atlanta (1996) and Toronto (2003). He has also contributed original compositions to Nimmons and Nine Now, a group formed by guitarist Mike Cado and overseen by Phil Nimmons to perform Phil’s music from the 1950’s, and to explore new directions for this unconventional instrumentation. Over the past few years composition has become an increasingly large part of Andy’s creative output, culminating in the debut of the Andy Ballantyne Large Ensemble at the Rex Jazz Bar in Toronto in March of 2006. This 11-piece band performs original compositions and arrangements by Andy and includes some of Canada’s finest jazz musicians; most notably David Braid, Kevin Turcotte, William Carn and Kelly Jefferson. Their debut CD “the Sum of the Parts” was released in 2008 to critical acclaim in Canada, the United States and Europe, and is available through cdbaby.com and also on Itunes and Amazon.com. Andy has been on the faculty at Humber College since 2002 teaching theory, composition and arranging, as well as coaching ensembles and giving private instruction on saxophone.

"Game on!" is a driving rock tune that’s a nice closer for your set. It’s a high energy feel that your students can really dig in on. The melody is catchy moves along with a purpose. A great crowd pleaser! Sample solos are provided for Alto and Tenor Sax.

Andy says: "This composition is a loving homage to the great Canadian trombonist/arranger/composer Ron Collier. The title is from an impassioned speech Ron once gave to a first-year jazz ensemble at Humber college warning of what their fate would be in the music business if they didn’t practice and get their “stuff” together. And yes, I was in that ensemble. The Phone Don’t Ring Jack is a feature for trombone, with a trumpet solo on the double-time section. The trumpet solo could just as effectively be taken by one of the saxophones in the band. The difficulty level is advanced, with a challenging lead trumpet part (up to Eb) and fairly complex rhythms."

Andy Says: "'Shuswap Shuffle" is named for beautiful Shuswap Lake in British Columbia. The piece was written with high school-level bands in mind and combines an accessible high-energy feel with some rhythmic and technical challenges. One important consideration for the band director is the creation of an authentic shuffle feel. Although written in 4/4 the underlying feel is 12/8, with all eighth notes played in a long-short triplet subdivision."

Andy Says: "The tune is essentially a long-form blues in F with a clapping 'breakdown' section followed by a more rock-oriented section in G for your guitar player to solo on before the melody is restated in a D.S. al fine. I’ll admit the feel on the guitar solo is closer to Magic Bus by "The Who" than a real Mississippi blues!"

Andy says: "I wrote most of 'Vista' while on a summer vacation with my family near Banff Alberta, and I'm sure the breath-taking mountain scenery had an affect on the outcome. Overall I was going for a feeling of space or openness with this composition. The 6/8 feel with eighth notes grouped in two's is obviously African-influenced, and was in fact inspired by a piece from Mauritius that I happened to hear on the radio."

Andy Says: "Dark Matter" is a musically sophisticated but technically accessible chart which features either alto or baritone sax in an extended feature. The main theme is in a straight eighth ballad feel with the solo section and shout chorus in double-time swing. The objective with this piece was to explore a more contemporary "dark" minor harmonic palette while keeping all the parts playable for young musicians.

Andy Says: This is my homage to legendary producer George Martin, who is often referred to as "the fifth Beatle" because of his impact on the classic recordings of the Fab Four. It's basically a pop tune with a few surprises, most notably the 7/4 time signature. There are also some polytonal chords inspired by the tape-looping on "Sgt Pepper's Lonely Hearts Club Band". Elements of Beatles melodies and George Martin's instrumental arrangements crop up throughout.

"El Castor Loco" is a fantastic take on New York Salsa. It's got all the syncopated rhythmic fun you'd expect from a pro chart made accessible to young bands. The slippery sax soli is a perfect showcase for your section and the drums solo with full band shots will be the highlight of your set. It features solos for any horn and drums, as well as a fully notated piano intro montuno section.

Epitaph is a reflective modern composition dedicated to a remarkable young musician who sadly left us too soon. The simple expressive melody is contrasted with a dense pan-diatonic harmonic pallet. While the technical demands are not extreme, this piece offers many challenges in terms of blend and rhythmic complexity. In addition to a strong tenor saxophone soloist with good harmonic knowledge, the rhythm section must be confident and sensitive to the soloist throughout.

“Round shot” is a tribute to the late great Cannonball Adderly from composer Andy Ballantyne. It’s inspired by his great tune “Here Dis”. The high energy soulful fun of this chart is infectious.