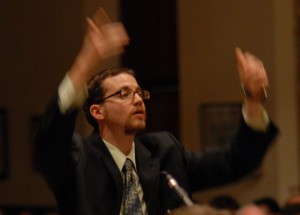 Josh Grossman is a graduate of the University of Toronto’s Jazz Performance Program where he studied trumpet with Chase Sanborn and Kevin Turcotte; he has performed in big bands under the direction of Phil Nimmons, Paul Read, Ron Collier and Paul Ashwell. Josh is the founder, Artistic Director and conductor of the Toronto Jazz Orchestra (TJO), celebrating its tenth anniversary in 2009. Since its inception, the TJO has released three CDs, performed with Phil Nimmons, Seamus Blake and Kurt Elling, and has presented special concerts including the music of Phil Nimmons, Stan Kenton, the Thad Jones/Mel Lewis Orchestra, and West Side Story. Josh was on faculty at either Scarborough Music Camp or Music by the Lake (both with the Toronto District School Board) for eight years and has been an adjudicator with Music Alive and PIMTA since 2008. Josh can be seen performing with his Toronto Jazz Orchestra and with the Chris Hunt Tentet; he has been the Artistic Director of the Markham Jazz Festival since 2006.

Josh says: "This tune, written in honour of my nephew, Chazz, features solo flugel horn, alto sax and guitar, and starts in a comfortablesamba groove. A medium tempo and relatively straightforward lines should make it accessible to senior high school ensembles."

This arrangement of the popular spiritual is an excellent showcase for solo alto saxophone. The straightforward chord progression and simple melody allow ample opportunity for experimentation and improvisation. Reasonable ranges and lots of resting time means this piece should be accessible to a variety of bands.

This original composition takes the band through a variety of grooves. Some tricky rhythm section and horn lines, and the feel requires a more mature band; a strong lead trumpet is also required.

Josh Says: "The Wiggle is a straightforward funk chart that features many of the rhythms and feels students will discover as they play more in the genre. Electric bass and keyboards (fender rhodes if you've got it) establish the groove off the top - make sure it's together and swing the 16th notes ever so slightly."

This is a fun, upbeat tune which celebrates children (two in particular) – the goal here is to capture the joy that young people can create. It needn’t be fast; everything should feel nice and relaxed throughout.

This arrangement of Dear Prudence is based on Brad Mehldau’s performance of the same tune on his recording Largo. It’s got a great groove and features 2 trombone solos.

This suite in four movements was written to celebrate the 90th birthday of Phil Nimmons, called the Dean of Canadian Jazz. The suite is based loosely on Phil’s Atlantic Suite, and borrows certain sounds and techniques from a number of Nimmons compositions.

“Reflection” is a beautiful and challenging ballad which requires controlled playing from each member of the ensemble. It’s really rewarding musically when played well.

“The Blob” is a rowdy rocker with some really killer bluesy moments. A fun showcase for your great Band and high energy soloists.