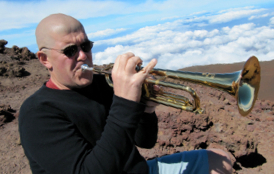 This great tune is by Toronto trumpet player and composer Jason Logue. It’s a swinging chart that’s very much a throwback to the classic Blue Note era of the 50s and 60s . The catchy melody is dripping with style written for trumpets and tenor saxes.

This is another Jason Logue. It’s a driving rock tune harmonically inspired by the Miles Davis classic So What. The melodies and solis slither through some tasty harmonic ideas and is balanced by being rhythmically simple. It features solos for any sax and any brass player and the improvisation is only over two chords so it’s great for any level of soloist.

This latin tune from Jason Logue is a fantastic party tune for the end of the set! It features lots of fun rhythms across the band and of course the drums. A guaranteed crowd pleaser.

This down and dirty blues from Jason Logue is a fun romp through a 12 bar form. It’s a great feature for your great guitarist.

This swinging tune from Jason Logue has a real swagger to it. It’s a great opportunity to get your rhythm section digging in and is an easy blowing tune for the horns. Check out the great soli section in the middle as well.

“Longhorn” is an exciting epic modal tune from Jason Logue. It’s got great parts for your saxophones and solo spots for alto and bari sax as well as trumpet. The repetitive nature of the melody and background shots as well as the simple chord changes make this up tempo tune playable by young bands.