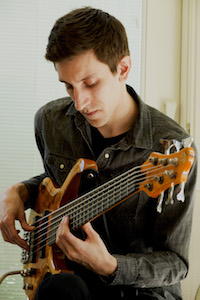 Brad Cheeseman is a bassist, composer, arranger and educator that has been performing in the Greater Toronto and Hamilton Area for over a decade. He leads the award-winning Brad Cheeseman Group, which features his original contemporary jazz compositions, was a finalist in the Toronto Jazz Orchestra’s 2014 Call for Scores, and has shared the stage with many great Canadian jazz musicians, including Bruce Cassidy, Terry Clarke, Adrean Farrugia, John Macleod, Mike Malone, Reg Schwager and Nancy Walker. Brad holds a Masters degree in music composition from York University, and is an Honours graduate of both Mohawk College and Humber College’s music programs.

"Song for L" is a highly dynamic composition with a large dramatic arc. I wrote this piece to commemorate the accomplishments of a close family member. The melody begins as an exposed trombone feature, with minimal rhythm section support and builds to a triumphant conclusion highlighting the entire ensemble. There is an extended trumpet solo over a set of chord changes that weave in and out of the Eb / C minor tonality.