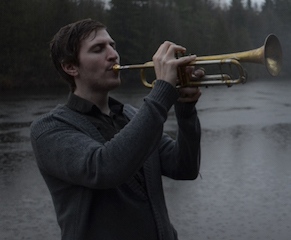 Ewan Divitt is a trumpet player, composer, arranger, and brass instrument repair technician. He is a graduate of Etobicoke School of the Arts and Humber College. While at Humber College, Ewan received the Harknett Musical Services award for excellence in brass, as well as the Duke Ellington Society Award for excellence in composition and arranging. While at Humber, Ewan had the privilege of performing with Michael and Randy Brecker, Bill Holman, Dave Holland, as well as spending a semester doing weekly composition and ensemble training with Rob McConnell. Ewan studied trumpet with Scott Harrison, Brian O'Kane, and Steve Crowe. He has also studied arranging with Andy Ballantyne, and John MacLeod. Ewan is an in-demand trumpet player in Toronto, and has recorded on many albums, and demos, music videos, played live on the radio, international live television, as well as toured with musical acts all over Ontario and Quebec. Ewan also leads his own big band that features many of the finest up and coming players in Toronto. The band plays original compositions and arrangements by Ewan and other members of the band. You can listen to tracks from the bands live performances at www.ewandivitt.com

Don Carlos' Dream is an intense Flamenco piece in 6/8 time. It features tight chord voicings to bring out the intensity of the piece, as well as an ostinato bass-line to anchor the ensemble.The drums can use a multitude of rimshots, castanets, and cymbals to create the feeling of dancing in the mountains of Andalusia, Spain. The piece features the melody and a solo for the baritone sax, as well as a solo for the piano. During the piano solo, the horn players clap a Flamenco pattern to simulate the rhythms of the castanets, and the stamping of Flamenco dancers.!